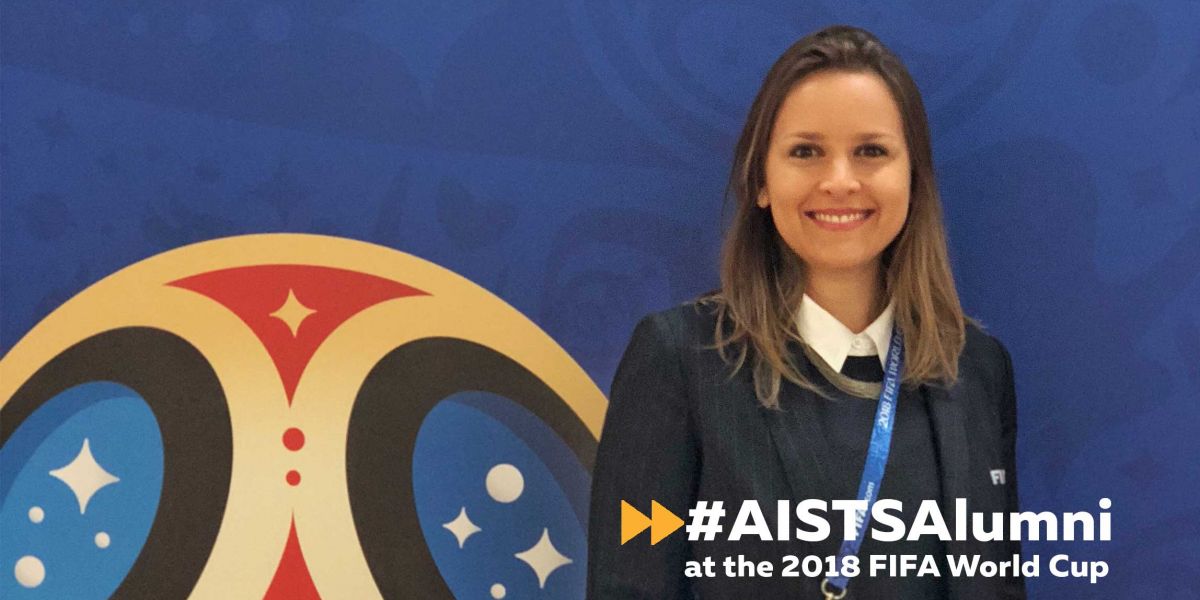 Thayssa is a Brazilian sports journalist, having worked as a field reporter for Radio Globo and CBN in Rio de Janeiro. In 2011 she moved to Lausanne and studied with AISTS thanks to the Future Female Sports Leader Scholarship granted by the June Canavan Foundation.  She is in Russia working with FIFA in her current role as Media Relations Manager.

During her time in Lausanne Thayssa did her internship with ASOIF (The Association of Summer Olympic International Federations) and worked with the IOC (International Olympic Committee) Social Media team on a consultancy basis.  Once back in Brazil, in 2012 she joined the Communications team of the 2014 FIFA World Cup Local Organising Committee and after the World Cup in Brazil was finished she was invited by FIFA to move to Zurich and work at their headquarters for upcoming editions of the tournament. Since April 2015 Thayssa has been a Media Relations Manager with FIFA.

Within FIFA’s media relations team, since I arrived I have been the project lead for the FIFA World Cup, what includes coordinating the Communications strategy and planning related to our flagship event on top of the daily work – media enquiries, releases, etc. Although the tournament takes place only every 4 years, the journey until then is full of promotional milestones and events such as draws, workshops and media tours. With the communications teams of the 11 Host Cities we had 17 workshops, 10 of which I was happy to attend. When working with communications and major events, the organisers have to deal with a great deal of scrutiny from the media and the public, so issues and crisis management is also a big part of what we do.

AISTS – So how is it all going for you?

Russia is putting on an amazing show. So far the operation is running smoothly and fans are extremely happy. The Red Square and the area around it became the main gathering point for fans from all over the world, just like Copacabana in Rio de Janeiro four years ago. In the media we see how perceptions are changing, with a lot of positive articles about the host country and the Russian people. There is also a lot of talk about what is happening on the pitch, with some surprises and VAR performing an important role. It will definitely be a World Cup to remember for every football fan. The same applies for us working in the event, with a lot of lessons and good memories to take back home.

The atmosphere and the adrenaline are just amazing – all the emotions coming from the fans and knowing that a very tiny part of everything that is happening was your contribution is priceless. Working for or attending major events like the FIFA World Cup or the Olympics is addictive – you do it once, and then always want to come back. Brazil, my home country, stands still for the full month of the World Cup. Being right at the centre of the action is something unique and a lifetime experience that I am thrilled to have for the second time now in Russia.

AISTS – you mentioned that you received the AISTS Future Female Sports Leader Scholarship.How has this helped changed your life?

I am confident that what I have achieved in my career so far was only possible because of the scholarship granted by the June Canavan Foundation. Without it, I would not have been able to move to Switzerland and pursue the AISTS degree, where I learned so much and met people from all over the world of sports. June’s legacy lives on in many ways, and I am proud and happy to be one of them.

AISTS – What is your advice for those looking at the next step in their sports administration career and wanting to get into events?

I would suggest to try and get involved with as much as you can – as a fan, as a volunteer or an actual job, no matter if the event is small or big. All those experiences are important and will be considered by future employers. And, of course, whatever you do, do it with passion.