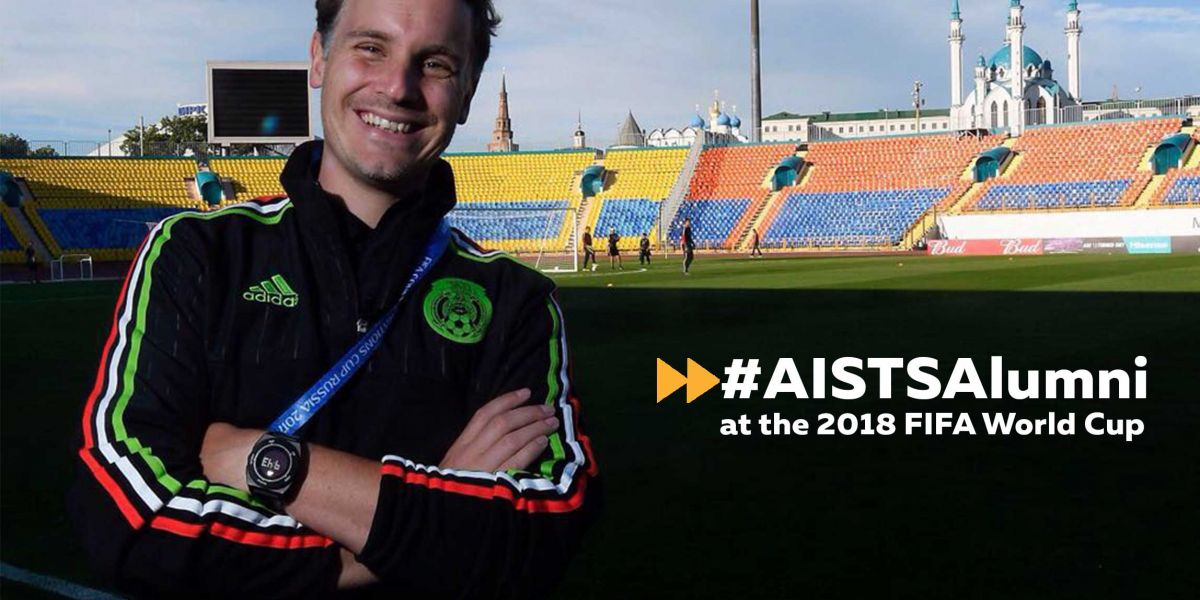 Our 4th AISTS Alumni working at the FIFA World Cup is Tom Vinkenvleugel, class of 2007 from the Netherlands, who is working for adidas. Tom has been with adidas since 2014 and this is his second FIFA World Cup. He currently is directing Sports Marketing for Latin America.

It has now been over 10 years for Tom since he began his studies in Lausanne with the AISTS. During his time studying Tom had the opportunity to do projects with the IOC – Games Department, the EURO 2008, as well as in cycling with Swiss Cycling. Cycling was where he stayed initially, and Tom was very happy for almost five years working with Swiss Cycling as the Marketing & Sponsorship Director.

Tom’s big life changer during his time with AISTS was not so much sports, but it was meeting his nowadays wife. So, after the Olympic Games in London 2012 Tom and his wife decided to move to her home country, Mexico, where for 1 ½ years Tom acted as an independent consultant for governments, federations, confederations and event organizers.  He then received a call from adidas right before the World Cup in Brazil in 2014 and one month later Tom entered adidas Mexico to manage their Sports Marketing area. Tom undertook this position for 3 ½ years and at the end of 2017 he took the opportunity to move to adidas Latin America in Panama, to direct Sports Marketing for adidas Latin America. It has been quite the journey for Tom and we caught up with him recently and asked how the 2018 World Cup was going for him.

In my current role I manage adidas’s sports marketing portfolio and the brands asset activation execution in Latin America. From Mexico down, down to Argentina / Chili, including Brazil; Federations, individuals, communities and events.

The National Federations / Teams of Mexico, Colombia and Argentina are sponsored by adidas and part of the LAM Portfolio. Adidas has in each team 2 sports marketing managers that are part of their National Team and take care of the Federations service 24/7.

Within these teams we also have several individual players that have endorsement contracts with adidas, as well as with players from non-adidas Federations; Brazil, Peru, Panama & Costa Rica. All these assets need to be served, we need to activate them and of course public relations is always a very important element of the daily work.

“An athlete works and dedicates all his life to participate and win on the highest level of play possible. As a sporting good brand like adidas – especially in the area of sports marketing, we accompany the athlete in this journey.”

We deliver him the tools to grow and perform – normally in the good and the bad. We really become a fundamental part of a player’s/athletes’ life. On and of the pitch. So we build and have built relationships – many times even personal – with the players and federations that participate in the World Cup. This gives a great feeling of personal connection and identification during a tournament like this, as well as satisfaction that you could be one of the many ingredients that was a supporter to the success – this from a sports marketing point of view.

AISTS – Do you have any advice for those looking at the next step in their sports administration career and wanting to get into events?

“The sports world is bigger than Switzerland.”

There are many interesting professional opportunities all over the world. Lausanne is not the only existing sports reality. Use the leverage AISTS and Switzerland gives you to broaden your horizon and gain sports and life experience internationally.