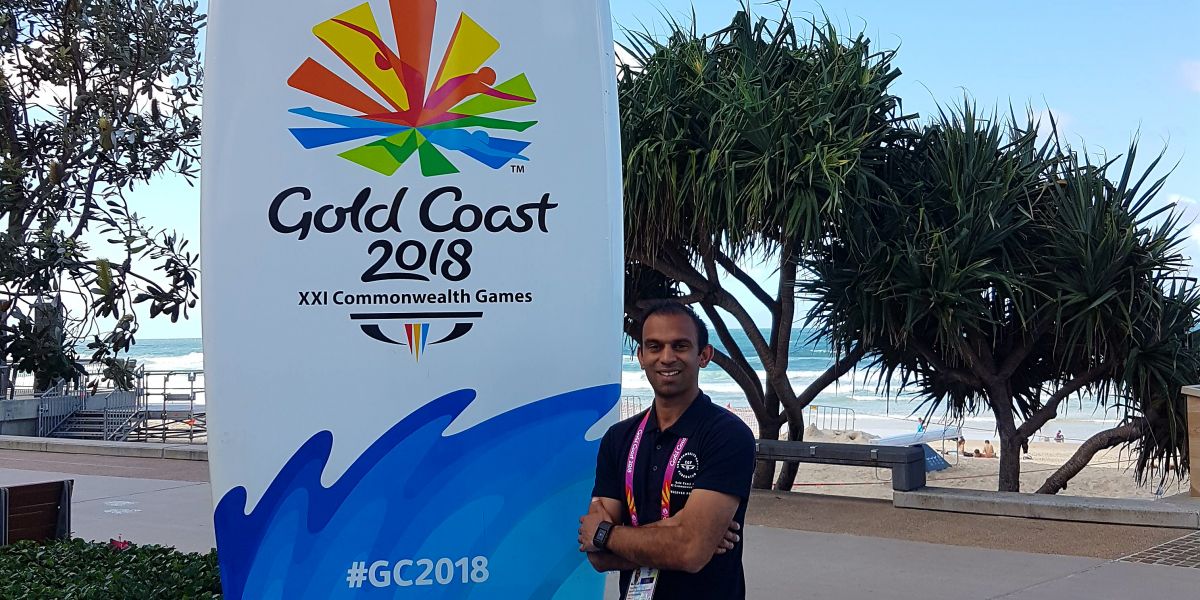 The Gold Coast 2018 Commonwealth Games commences today, with more than 6,600 athletes and team officials from 71 Commonwealth nations and territories participating in this mega event.

Members of our AISTS Alumni community will be there at the Games and we recently caught up with Pranav Knot, class of 2007.

AISTS – YOU GRADUATED FROM THE CLASS OF 2007.  WHERE HAS THE SPORTS ROAD TAKEN YOU SINCE THEN?

After completing the MAS, I was fortunate enough to get a job with EKS (Event Knowledge Services), now known as Lagardère Sports Switzerland. My very first project happened to be in my home town in Pune, India in 2008 at the Commonwealth Youth Games. Since then I have had an exciting journey working on Olympic Games Bids and Commonwealth Games across world. The main projects have included the Olympic Bids in Istanbul, Budapest and Krakow and Commonwealth Games in Delhi, Glasgow, Gold Coast and Birmingham on behalf of the Commonwealth Games Federation (CGF).

I started working with EKS at the beginning of 2008. My role includes planning and project management for major events focusing on areas of venues and transport. I have supported the development of Games Master Plans for Commonwealth Games and Olympic in my role as Project Manager working with architects, cost planners and transport experts. I have also worked as a Project Manager for the CGF Evaluation Commissions and Coordination Commissions for 2014, 2018 and 2022 Games cycles.

AISTS – EKS HAD THE NELSON MANDELA QUOTE OF “SPORT HAS THE POWER TO CHANGE THE WORLD”.  HOW ARE YOU ADDING TO THIS WITH YOUR ROLE?

At EKS, our endeavour is to use the Games as a catalyst for achieving long term development goals for cities and regions. I believe through the projects we have undertaken at EKS we have been able to leave positive legacies for each of the cities we have worked in.

In our experience sport had a unique ability to unite communities and help them work towards common objectives.

At the Commonwealth Games in the Gold Coast I am working as a Project Manager for the Observer Programme by the CGF. The Observer Programme includes structured classroom sessions and venue visits which provide attendees an understanding of Games requirements in a “live” Games context. While the main audience for the Observer Programme is the next Host City and potential Bid Cities for Commonwealth Games, it also attracts other event organisers and sport organisations. At the Gold Coast 2018 we are expecting approximately 100 attendees from 15 different organisations to take part in the programme. The Observer Programme is a key component of the CGF Transfer of Knowledge initiative.  In the lead up to the Games I have been involved in the Gold Coast Games through the Technical Reviews and Coordination Commissions meetings undertaken by the CGF to get an oversight on the project status. These reviews took place on a six-monthly basis.

AISTS – WHAT’S YOUR NEXT BIG PROJECT?

I don’t know yet but I have been working on Feasibility Study for an Olympic Games in Brisbane and involved in foundation planning work for Birmingham 2022 Commonwealth Games.

AISTS – WHAT ONE THING DID YOU LEARN AT THE AISTS THAT YOU STILL KEEP IN MIND FOR YOUR WORK TODAY?

I consider myself privileged to have worked in many different countries in the world and the experience of being with classmates of various backgrounds and cultures at AISTS prepared me for this.

AISTS – DO YOU HAVE ANY ADVICE FOR THOSE LOOKING AT THE NEXT STEP IN THEIR SPORTS ADMINISTRATION CAREER AND WANTING TO GET INTO EVENTS?

I am still in a learning phase of my career myself. The only advice I would give is to take in all the experiences you can and keep learning every day.