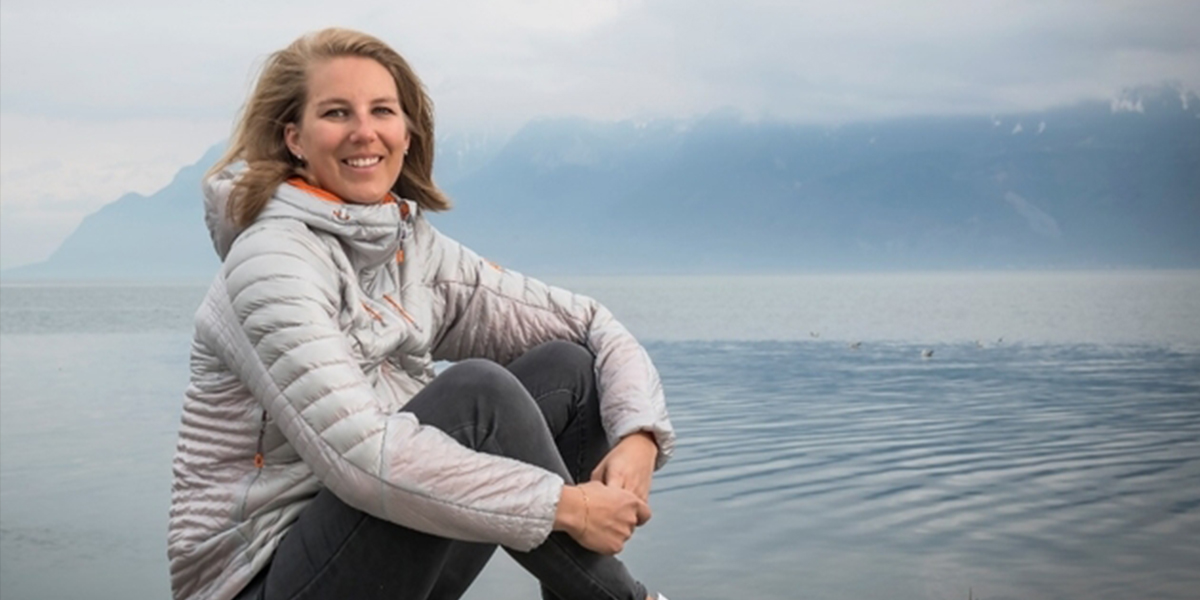 Olympic sailor and AISTS 2015 alumni Anne-Sophie Thilo talks to us about the power of taking risks. From climbing the iconic Matterhorn mountain with no prior mountaineering experience to leaving a job at the International Olympic Committee (IOC) to start her own business, risk-taking is in Anne-Sophie’s DNA.

Anne-Sophie grew up in Lausanne, Switzerland and always had a love for sport. But it was sailing that truly captured her heart.

Despite saying that she was ‘never a natural talent’ Anne-Sophie’s sailing career saw her become a twice European Junior Champion, Vice Junior World Champion, Vice-Champion of Europe in the 470 series, and compete in the 2008 Beijing Olympic Games.

The importance of a dual career

“Despite all of the training and competing it was always important for me to have a dual career while I was doing my sport,” says Anne-Sophie. “Which is why I studied my bachelor and master communications degrees alongside my sailing.”

Anne-Sophie retired from sailing in 2013 and her first job was helping silver medallist figure skater Stéphane Lambiel open the Skating School of Switzerland.

“We had known each other for years and actually met close to where the AISTS offices are now located,” remembers Anne-Sophie. “A lot of young athletes used to meet at the lake to train – from all different sports – skating, rugby, sailing. We became friends and I was very happy to help him to launch his school.”

Anne-Sophie worked full time, running the public relations, sponsorship, and communications for the Skating School of Switzerland’s Ice Legends show, before deciding to embark on her AISTS Master of Advanced Studies in Sports Administration and Technology in 2015. She continued to work for Stéphane Lambiel’s company throughout her Masters and was back in the office 100% after finishing the degree.

“A year and a half later, I started working at the IOC in the Youth Olympic Games department’s education team,” she says. “I was in charge of creating different content for young athletes as well as managing the Young Change-Maker (now Young Leader) and  the Athlete Role Model programs.”

Giving up the IOC to go independent

But – after two years in the job – Anne-Sophie wanted a new challenge and decided to go independent. She launched her own communications company EKKUT in early 2019.

“Everyone is like, what did you do?”,” she smiles. “But it isn’t a decision I took lightly. Being, a sailor you have to run your own company and I realised that I liked it and I missed it. I realised that being my own boss was what I needed to be fully happy.”

EKKUT covers three strategic pillars; communication strategy, media and publications, and engagement. Most of EKKUT’s clients are in the sports world, but the new-found freedom also gives Anne-Sophie the opportunity to follow her other passions. She now volunteers her time to various charities and not-for-profits including an organisation that helps young migrants through the power of sport.

“I got to experience the big machine of the IOC with 600 people working together,” says Anne-Sophie. “And I will be forever grateful for that, but for me it made sense to take the risk and go it alone.”

Taking risks is something comes easily to Anne-Sophie, and she seems to thrive on constantly challenging herself both physically and mentally.

“It sounds a bit cheesy, but you have to believe in yourself,” she says. “Because if you don’t try you will never know. I’m not afraid of failure anymore and maybe I learned that from sport. If I fail, I will learn from it, adapt, and just keep going. I’m not a surgeon, so if I fail nobody dies.”

It was this mentality that encouraged Anne-Sophie to reply to an advertisement looking for Swiss women to join an all-female expedition called ‘Matterhorn: Ladies Please!’. The expedition was created to celebrate the 150-year anniversary of the first woman to climb the iconic peak, Lucy Walker.

“Climbing the Matterhorn seems very different to sailing but there are lots of similarities,” says Anne-Sophie. “It’s outdoors, you’re playing in nature and you always need to expect the unexpected. As a Swiss person, it was always my dream to climb the Matterhorn so when I saw it on social media I dared to try and I was selected.”

Like many Swiss, Anne-Sophie had spent plenty of time in the mountains. But she had no official mountaineering experience except a few climbing experiences. Luckily, this wasn’t a prerequisite and the chosen team of four women completed one week of intensive training before the summit bid.

“It’s actually not so technical,” says Anne-Sophie. “It’s just very long and very physically and mentally hard. You need to be focussed 200% for eight hours and even when you reach the top you need to focus on getting back down safely.”

Despite having some difficult and uncertain moments during the climb, Anne-Sophie made it to the top (and back down safely), fulfilling her dream of climbing the Matterhorn.  But what advice does she have for others who want to achieve their dreams?

How to make your dreams a reality

“Whether it is a professional or a personal dream, say ‘this is my dream’ out loud,” she says. “And ask yourself what you can do to move closer to that objective. It’s about working hard and putting in the extra effort. There were 10 kids better than me at sailing, but I went step-by-step to reach my goal. Always dare to take that first step and keep moving forward.”

Anne-Sophie has an exciting future ahead of her; she has just been appointed as Press Attchée for the IOC Refugee Olympic Team in Tokyo 2020 and is focussed on making her new business a success.

“I want to make my company sustainable in the long term so that I can continue to be involved in projects to give back to young athletes and to society,” she says. “I really think that it is our duty to mentor, support, and guide, particularly as athletes.”