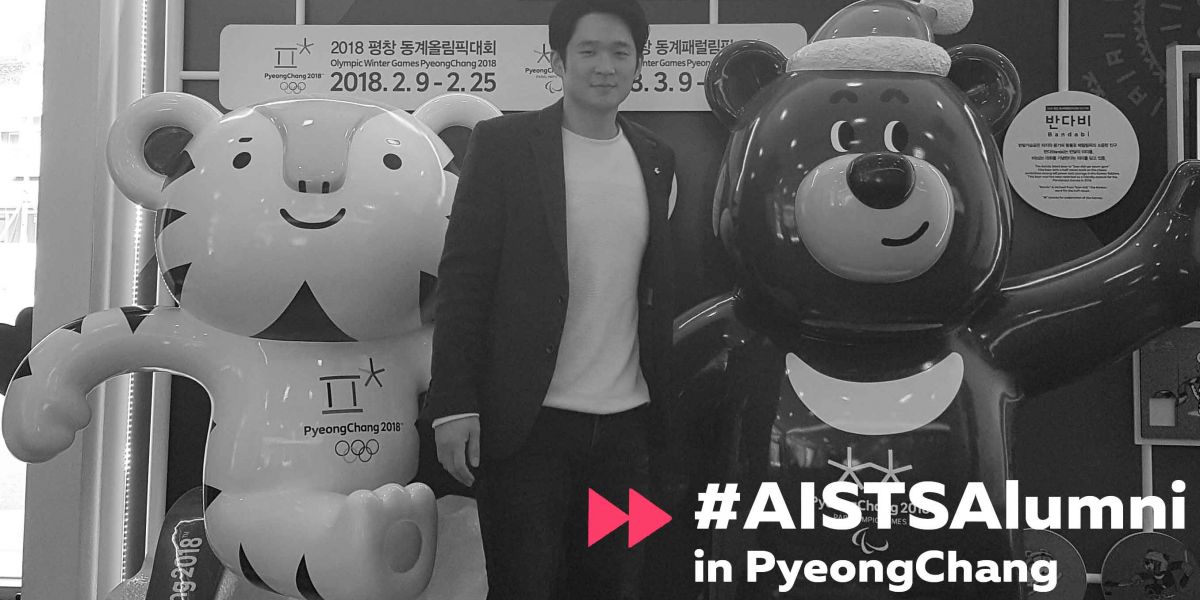 “The XXIII Olympic Winter Games will be held over 17 days, from 9 to 25 February 2018 in PyeongChang, Gangwon Province, the Republic of Korea.  In the run-up to the biggest winter sports event, we catch up with our AISTS alumni playing a vital role at the PyeongChang 2018 Olympic Winter and Paralympic Games.”

This week’s AISTS Alumni in PyeongChang is  Junoh Lee, class of 2014.  Before joining the AISTS Junoh was a member of the Korean National Floorball Team, coached national teams and also worked for the Korean Floorball Federation.  His love for sport is evident and it is no surprise that he has been working with the PyeongChang Organizing Committee since 2015.   Junoh started with the Test Event Management Department (TEM) and then once the test events were complete joined the Partner Service Department in the Marketing office and is currently the Senior Manager. We caught up with Junoh last week.

AISTS – TELL US YOUR JOURNEY SO FAR FROM LAUSANNE TO PYEONGCHANG 2018, SINCE GRADUATING.

I was struggling with getting a job in Lausanne after my graduation so I made the decision to come back to Korea and build my career with the upcoming Olympics, in order to return to Lausanne full of “Olympic spirit”.  In Korea, I started to work for a start-up company which organised various sports events such as cycling tours and outdoor activities before I got my position with the PyeongChang Organizing Committee. It was quite challenging for me because I had to ride a bicycle to lead the participating riders, who were better at cycling than I was. As there were only four people working for the company, we sometimes faced unexpected situations during the event operations due to lack of human resources. Although I enjoyed working for the company, I had to move forward to achieve my goal for the Olympic career. I kept applying for the PyeongChang Organizing Committee for the 2018 Olympic and Paralympic Winter Games while I was working. After two failures, I finally got hired in October 2015 and my journey to the Olympic Games commenced.

YOU HAVE HAD 2 DIFFERENT ROLES FOR THE GAMES.  TELL US ABOUT THESE 2 ROLES AND HOW THEY ARE DIFFERENT.

My first role was to deliver successful test events in the Test Event Management Department (TEM). There were 30 test events, mostly World Cup level events, such as the FIS Ski & Snowboard World Cup and the ISU Skating World Cup, hosted before the Olympic Games. All the events were held at the same venues where the Olympic competitions will take place in less than two weeks.

First, our team set up basic plans, objectives and strategies for the events, then we supported each Functional Area (FA). Also, one of our responsibilities was to allocate budgets to each FA based on a defined service level. At the operating phase, I was involved in marketing the FA’s and working with International Federations’ sponsors and event agencies, such as IMG and Infront.

After completing the test events successfully, I joined Partner Service Department in Marketing office. Since then, I have been working as an account manager dealing with Olympic Partners and local sponsors. Now, my primary role now is to provide contracture entitlements for the Olympic partners and local sponsors. Additionally, I support them to activate their marketing rights on various Olympic related events, ranging from 300 to 25,000 participations. My other responsibilities are providing venue tours, education programmes to sponsors and organising partner workshops for sponsors of around 100 companies.

As some of my friends know, I met my lovely wife here at the Committee. So, my typical day is quite different from the ones when I was single. I used to work late and drink with my co-workers until late at night. After being married, I do cleaning, cooking and some of the house jobs after work. Also, I joined various in-company sports clubs where I can play basketball, tennis and ice-hockey. I play these sports one or two times a week, not only to get rid of stress from work, but also to help build a strong relationship with co-workers which is important.

WHAT’S THE BEST PART OF YOUR JOB?

This Olympic Games will surely be successful and it will be remembered as an honourable history for South Korea.

“I feel honoured to be a part of this great event and highly motivated to work for the Olympic Movement.”

I have not only had the chance to build a professional career in event management and marketing but also I met my lovely wife from this job. That is the best part of my job!

IN THE LEAD UP TO PYEONGCHANG 2018, WHAT DO YOU THINK WILL BE YOUR BIGGEST CHALLENGE?

North Korea has just decided to participate in the Games. With less than two weeks left we have to adjust some of our plans in order to achieve this huge objective – the ‘Peace Olympics’. We must make the best environments for the participating athletes to enable them to compete at their best, while protecting the Olympic spirit from negative effects from such political matters.

“The Olympic spirit should never be ruined by politics.”

WHAT ONE THING DID YOU LEARN AT THE AISTS THAT YOU STILL KEEP IN MIND FOR YOUR WORK TODAY?

The most important thing I learnt at the AISTS was to ‘never give up’. Everything was a challenge for me in Lausanne because of the language barrier and the different culture. When I was having a hard time, I sometimes blamed my decision to move to Lausanne. However, I could overcome these difficulties because of my great friends and the great staff from the AISTS who were always there encouraging me and supporting me. And I eventually ended up in the Olympic movement, and it has given me such a pleasant life, even if it was a challenge sometimes. So, whenever I face any difficult situations in my life or in work, I always remember my time in Lausanne and that always makes me stronger. So, my last words should be

“Thanks to my AISTS friends and the staff for giving me the courage to live my life!”