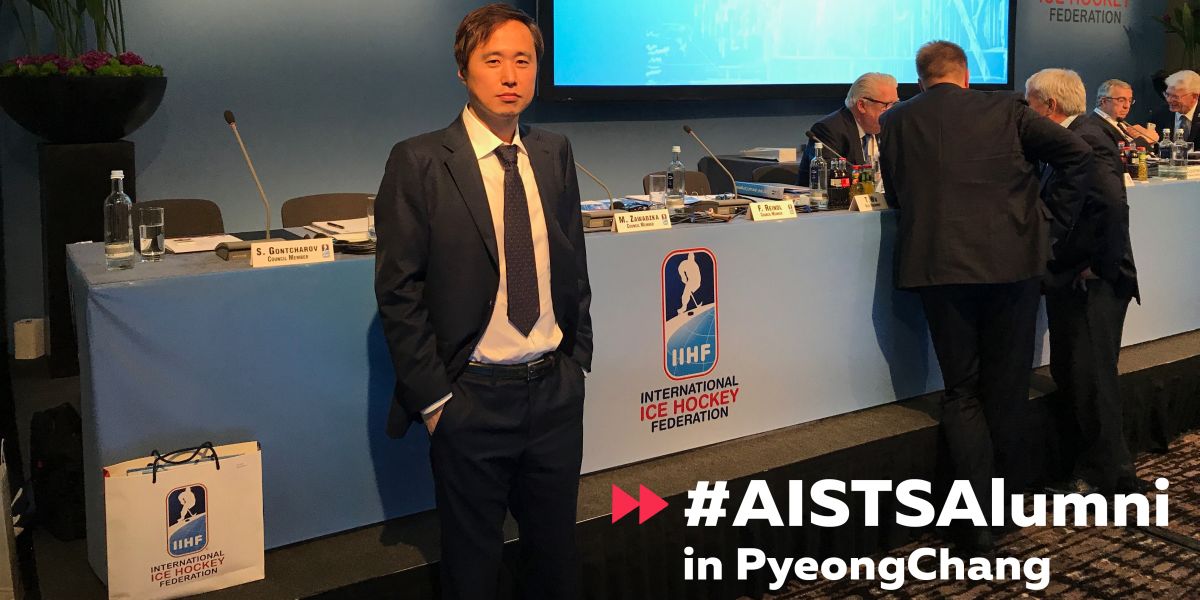 The XXIII Olympic Winter Games will be held for 17 days from 9 to 25 February 2018 in PyeongChang, Gangwon Province, the Republic of Korea. In the run-up to the biggest winter sport event, we catch up with our AISTS alumni playing a vital role at the PyeongChang 2018 Olympic Winter and Paralympic Games.

To kick things off we interviewed Jisuk Chae late last year.  Jisuk graduated from the MAS class of 2014. Before studying in Lausanne Jisuk had worked for eight years as General Manager of the Special Olympics, along with experience in sports media and broadcasting as well.  He has been on quite a journey since his days in the Olympic capital.

AISTS – TELL US YOUR JOURNEY SO FAR FROM LAUSANNE TO PYEONGCHANG 2018, SINCE GRADUATING.

Jisuk – It was quite a journey with unexpected paths I crossed since I graduated from the MAS programme in February 2015. The question I was asking myself approaching my graduation was whether to stay in Switzerland to look for another adventure or go back to my country to contribute to the Korean sports industry. It was at this time that I got a call from the International Sports Relations Foundation, Seoul, Korea for the position of Secretary-General. After coming back to Korea to work for the Foundation, I launched the Sport Academy for the retired athletes in order to provide them with post-career education. Whereas it was a greatly rewarding experience, I was still thirsty to achieve something more valuable.  The PyeongChang Organizing Committee was looking for a head for Venue Management Team, so I applied and got a position. Two months later, I took over the Venue General Manager for Sliding Centre to which I was completely new to. This position was one of the toughest, inside the venue team, and there were already three who had quitted that position. I did my best for four months to complete my mission at Sliding Centre by finishing the pre-Homologation event, then moved to the Ice Hockey Venue team. Here I had a chance there to work with Sohee KIM, another AISTS alumni (2008) working in POCOG. 6 months later, however, I had to move again to the ice hockey sport team as there was an urgent vacancy to be filled.

Jisuk – Venue Manager and Sport Manager are the two core positions in delivering a successful Olympic Games. In POCOG, there are 54 functional areas supporting the games and the Venue Manager, as a control tower leads, monitors and coordinates them to support the success of the Games. The Sport Manager’s role is focused on the ice hockey game itself to prepare all the fields related to the athletes, teams and competition area and works most closely with the International Federation. As a Sport Manager I must be the one that knows all about ice hockey, liaisoning with the IIHF experts. As most of the functional areas are not familiar with the ice hockey game, the road to the Olympics is full of complicated discussions and conflicts with each other. The Venue Manager works often as a mediator to provide a perfect environment for the game, which Sport Manager elaborates at the front lines, such as ice making, recruiting and educating specialized workforces, providing services to athletes and communicating with IIHF.

Jisuk – POCOG’s HQ office where I work is still in PyeongChang, 40 minutes away from my venues in the coastal city, Gangneung. On an average day I go to the office and work 9 am to 6 pm, then I often stay in the office in the evening to communicate with the IIHF office, having 7 hours of time difference between PyeongChang and Zurich (where IIHF HQ is located). During the weekdays, I play ice hockey twice a week on Tuesday and Thursday. However such typical days are becoming extremely rare as the Games are quickly approaching.  In the lead up I know all my energies will be concentrated on being Games ready.

AISTS – WHAT’S THE BEST PART OF YOUR JOB?

Jisuk – Sometimes it still feels like an unrealistic dream, to work as a sport manager for such a high-level event, the Olympic ice hockey. Not many people have this privilege – actually only one in the world every four years. It’s a once in a lifetime experience to prepare the Olympic Games, providing the best possible service to the worlds best hockey teams.  It’s exciting. Being part of what I have dreamed of since childhood does not always happen. I cannot buy such a professional career of living for, with and by ice hockey. This priceless experience is the best part of my job.

The best moment came up during the last IIHF annual congress in May, where I had a chance to meet the legends in this sport such as Vladislav Tretiak, Joe Sakic, Uwe Krupp, Teemu Selanne and Saku Koivu, former NHL player and IOC member as well, who has impacted my life the most. Meeting a hero is always something special, not only to children but even to a guy in the forties like me who never stops pursuing his dream. I overcame certain challenges in my life in my early twenties by witnessing Koivu’s courage, dedication, leadership and his contribution to the community, especially while he had to fight against cancer and make a dramatic comeback as a Montreal Canadiens captain. His whole career with ice hockey inspired me and I have achieved what I am now thanks to him. It was the moment of my life when I was able to talk with him and give him my personal gratitude. It is really a movie script that a young fan of an NHL player gets to grow up and met him again twenty years later as an Olympic ice hockey sport manager. In such an unexpected way my life was so rewarded for my passion for ice hockey.

AISTS – IN THE LEAD UP TOPYEONGCHANG 2018 WHAT DO YOU THINK WILL BE YOUR BIGGEST CHALLENGE?

Jisuk – It is very disappointing to me and our team that the NHL players are not participating in the 2018 Winter Olympics.  However, there is no impact on our preparation and we will certainly deliver the best Games ever to the world. Their absence itself is not a challenge to me, but underneath this bitter situation, I see the fundamental alienation and indifference from the public and stakeholders, which I believed and hoped the NHL’s participation could make a meaningful turning point in the country of short track and speed skating. On the other hand, both men and women Korean teams are ready to make another ‘miracle on ice’ in 2018. Even though it is not so long ago that it was taken as a joke, even in Korea, to say that Korea can play at the top level, we have achieved it by getting ourselves promoted to the top division of World Championship in the next year. But still, ice hockey has never taken the priority in Korea in terms of a winter sport. Whereas it is regarded as the most important sport in the winter Olympics, the reality here is far from that expectation. In this regard, our biggest challenge is to minimize the gap between the world’s expectation and our reality as a minority sport.  We have to find out how to spread out and share this joy and excitement of the game of ice hockey with people so that it will not end as a one-off event.  We want to leave a legacy and by collaborating with the NF, we believe we can make it happen.

AISTS – WHAT ONE THING DID YOU LEARN AT THE AISTS THAT YOU STILL KEEP IN MIND FOR YOUR WORK TODAY?

Jisuk – Harmony in diversity. I should say that I struggled with it a little bit during my AISTS days. I saw not only a lot of positive aspects that come with diversity but also the negative side effects as well. In the end, though, no matter where we are, all those aspects exist and we have to be faced with them every day. Through AISTS, I tried to teach myself how to keep moderate and balanced in such a diverse environment. The same philosophy applies to working in POCOG which has even more complicated structure with 54 functional areas with more than a thousand people having different background for a single mission. Creating a harmony is a key factor to minimize the structural risk in such groups of diversity.

We often say that the world of sport is small and all connected to each other. Since graduating, I have already met many of my classmates working with the IOC, IFs and other organizations. I am also working together with some of my AISTS alumni even in the same office. I used to ask myself what is the value of studying at AISTS. I was fortunate to meet nice lecturers, professors, alumni and classmates, who are the current and future key persons in the sporting world. It is amazing to meet those people continuously in the field of my profession. AISTS is not just an academic program to me – it is a career path through which I could create my new step into the international sports industry. I have learned and earned valuable things from the moment of the first class by Dr Claude Stricker to today, and after the Olympics completion, I would like to share with future alumni all my experience and learnings one day just like the alumni in the past did with us.