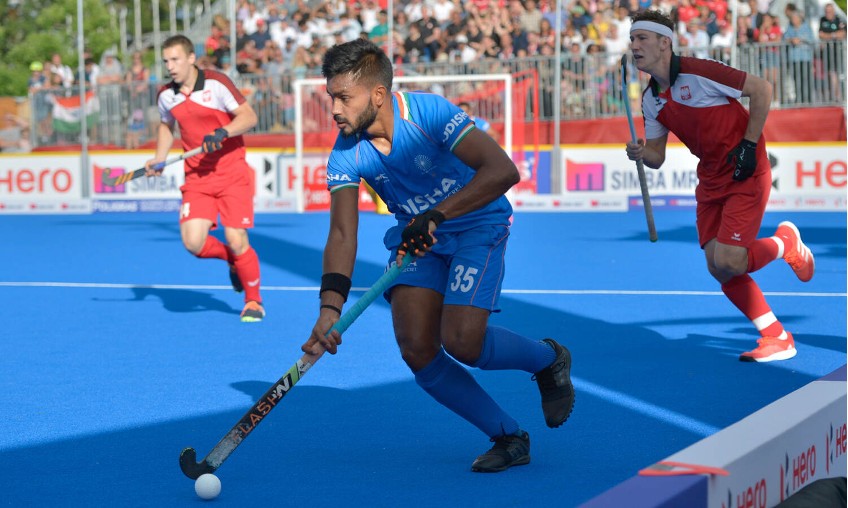 Just 4 weeks ago, 7th June saw 8-time Olympic champions India bag the Gold medal in the recently concluded Hero FIH Hockey5s Lausanne 2022! Do not be mistaken, this isn’t another field hockey achievement by the most decorated hockey-playing nation in the world; instead, it’s a newer, faster, and more exciting format of hockey that was played in the Olympic capital, conquered by a young and driven Indian side. The ardent team took on the formidable Poles and were trailing by 3 goals to nil, only to come back and convincingly beat them by 6 goals to 4! The fans were treated to a thrilling encounter, in which both teams showcased some electrifying attacking plays.

Now the question arises, what exactly is Hockey5s and how is it different from the age-old sport of field hockey? Hockey5s is a super-fast, highly skillful, short format of hockey that is adaptable to multiple surfaces, environments, and spaces. Essentially, it is an invasion game played between two teams with 4 field players and a goalkeeper, much like what futsal is to football.

Hockey5s incorporates all the skills and game principles of Hockey. With fewer players, less space, and rebound boards on all 4 sides of the court, it also presents a range of different tactical options to other formats. Being an intense 20-minute game – having two halves of 10 minutes each – with 4 substitutions allowed per game, Hockey5s is being pushed as an easily adaptable format to expedite grassroots development of hockey all over the world. Not only is it being quickly adopted by all hockey-playing nations, the pace of the game coupled with the low time commitment has made it an instant hit with fans who have witnessed any Hockey5s game.

With Hero FIH Hockey5s Lausanne being the first official senior World Hockey5s competition to be organised by the FIH, there are still some ways to go before this format of hockey is finalised. The Lausanne 2022 tournament showed us glimpses of what’s working and what needs to change going ahead.

One of the biggest positives of the tournament was its reception by fans and viewers. Hockey 5s is like a blink-and-you-miss-it contest. It is spectator friendly with more matches in a short period, with intense contests and many goals!

Hockey5s does come with a justified concern, however, with the players being free to shoot from anywhere increasing the risk of injuries, and the safety of athletes becomes a major talking point in this format of the game.

The young Indian men’s team scored an impressive tournament-high 25 goals and were equally reliable at the back conceding just 10 goals in 5 matches. India’s Mohammed Raheel was the shining star as he reached double digits in goals scoring 10 goals in just 5 matches, with a brace in the finals!

While the international calendar for 2023 is yet to be finalised, all teams have their sights set on the first-ever Hockey 5’s World Cup 2024 that will take place in Oman in two years’ time. The Hockey 5’s World Cup will see 16 teams from 5 confederations battling it out for ultimate glory and all the bragging rights in their sport!

It is equally important to appreciate the grit and fighting spirit that the Indian Women’s team showed throughout the tournament, with the highlight being a hard-fought win against hosts Switzerland in a highly competitive affair. They narrowly missed out on playing in the final after drawing their last must-win game versus South Africa 4-4.

The Women’s team showed promise and bursts of excellence and have a lot of positives to take from the tournament, that they can look to build on in the upcoming months.

On the business side of things, the event witnessed high acceptability and viewership from fans. This, coupled with the support of a major broadcaster like Star Sports, suggests that Hockey5s can draw significant sponsorship as a standalone event. As money cascades into the sport from the private and the public sector, it can be used to build a grassroots system of 5-a-side hockey among the youth of India, which would eventually help further develop field hockey in the country.

The inaugural Hockey 5s tournament hosted by the Olympic capital Lausanne was received by fans around the world as a festival celebrating the sport of hockey. Former India captain Dilip Tirkey had this to say about Hockey 5’s, “Even if hockey follows the T20 model of cricket, what’s harm in that? I have personally liked the shortest version and the overall vibe it brings. What’s more interesting is the pace of the game which will definitely make it more engrossing. Hockey5s, therefore, is a significant step in making the game more popular in the coming days.”

From an Indian Hockey standpoint, Hockey5s will attract a lot more youngsters to take up hockey as it doesn’t have the same space or player constraints as field hockey and can be played on various surfaces, making it a lot more inclusive and easily accessible to the youth.

In the words of former Indian skipper, Zafar Iqbal, “Given the fact that the format attracts the youth, Hockey5 is a brilliant thing for the future. The format has every ingredient to make the game immensely popular in the coming days”

It is a moment of pride for not just Indian hockey, but every Indian as both our men’s and women’s Hockey5s teams take on the challenges ahead and prepare for their quest for international glory!

Wishing them nothing but the best for the future and we cannot wait to support them every time they go out donning the national colours.