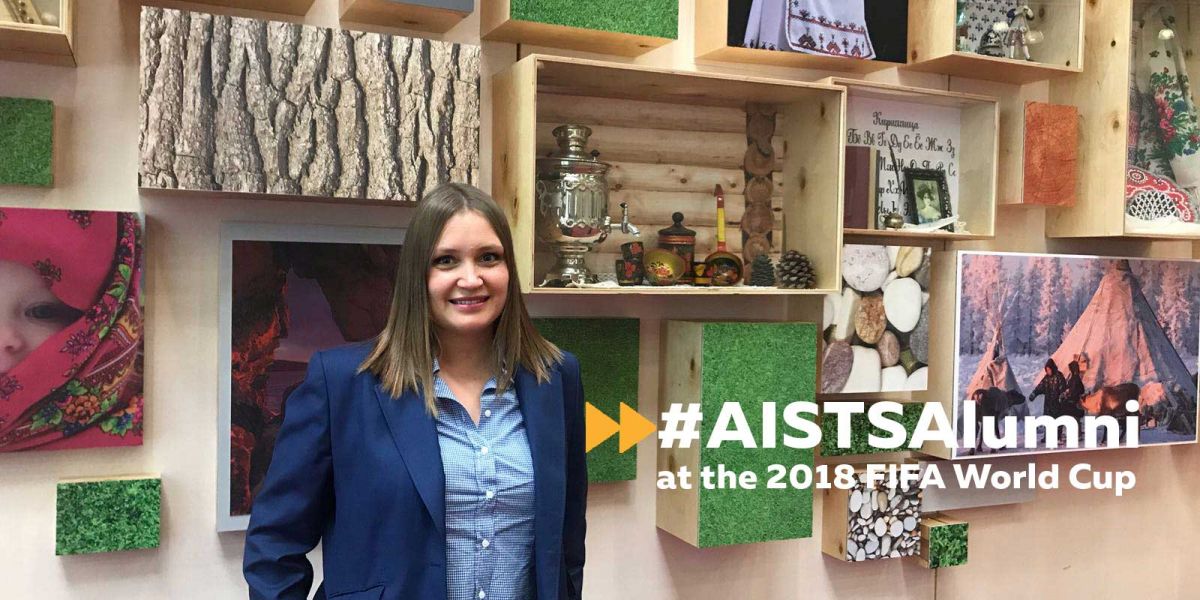 The 2018 FIFA World Cup may be finished but we are not with our alumni interviews.  Our fifth alumni working in Russia, this time with Host Broadcasting Services (HBS) is Alexandra Volkova Jurema, from the class of 2009.

Prior to Alexandra moving to Lausanne she worked at a Russian public sport broadcaster as a producer and then in 2010,  she got involved in sports as an Events and Marketing coordinator with AIBA’s new project World Series of Boxing. Her career in AIBA was very dynamic and Alexandra left in 2013 as the Development Senior Manager leading the department.  Since then, Alexandra returned to sport television as a freelancer and has been professionaly progressing in this area. During the Winter Olympic Games in Sochi in 2014 she worked for the biggest production company in Russia – Panorama – providing a Russian-athletes-tailored feed to Russian broadcasters. In 2016 Alexandra worked with Olympic Broadcasting Services as a Mixed Zone Manager for the Summer Olympic Games in Rio. She has also been involved with UEFA as external Venue Operations and Broadcast Manager (VOBM), working with European Qualifiers, Europa League and EURO competitions, and this year Alexandra was very lucky to join Host Broadcast Services at the FIFA World Cup in Russia.  We interviewed Alexandra last week and asked her what her role was with the World Cup.

AISTS – Tell us about your current role?

I was hired for competition-time only for this World Cup. As for most of my assignments, I engage on an event/season basis as a freelancer. This enables me to balance my private and professional life so I have time for family, whilst at the same time continuing to grow my career and learn from the best companies and from the biggest events.

“Host Broadcasting of the FIFA World Cup is a massive operation.”

HBS produces 12 different feeds from each match with 37 cameras. All these feeds are received in the International Broadcast Centre (IBC) logged, used to produce live content like multi-angle clips, half time highlights, interviews, emotions, as well as post production elements like preview and highlights shows and much more; everything that broadcasters may need to deliver the best coverage of the World Cup action and all that surrounds it. Behind every match there are hundreds of people at the venues producing feeds and in the IBC constantly logging, editing, creating, translating, publishing, managing this content. Besides match action, HBS produces feeds from MD-1 activities (official trainings press conferences, interviews), stories from training camps with individual interviews, promos, team features, other football and fans and Russia related stories.

All these live feeds and hundreds of hours of edited materials are uploaded on a mass storage called FIFA MAX and made available through FIFA Content Interface (FCI) platform where editors from different broadcasters can pick up and download any material they need for their programming.

The role of our team, Media Rights Licensees (MRL) Support Producers, is to make sure our partners are aware of the content available, use it for live production and for other World Cup related shows. Also that they share their own content, for example, native language commentaries, with fellow MRLs and us. They address all their FIFA MAX related questions to us and we either respond or channel it internally.

This job requires good understanding of what TV production of major sport event is, specifically football, what HBS produces and makes available for media from all around the world, and of what rights-holders are doing and may need for their programming. Besides competence in sport TV production, we have to speak various languages to work with MRLs from around the globe. In total, 5 of us speak 9 different languages. We need to be open and culturally aware, we need to know how MRLs are operating and develop trustworthy and professional relationships with them.

Our team was based in International Broadcast Centre (IBC) in the Production Centre of HBS.

“FIFA World Cup is not only a competition. Today it is also a great entertainment product, that engages and unites fans from all over the world. It is cool to be part of it and to know that I have contributed to this high-quality show.”

I learn a lot from my leadership about television production standards, quality and management. I got very lucky with the team, with my line manager and working atmosphere. It is a pleasure to come to work every day, deliver assignments, share knowledge and improve my skills and competence together with colleagues from all over the world. Besides our busy schedule, we find time to share, discuss and have fun.

I also like these border assignments between host broadcast operations and MRS, when you act as a link between what is produced and how it is used in reality. It is rewarding to see that the product of hundreds of people in HBS is really being used and that our partners are happy with the quality of it and actively integrate it in their World Cup coverage.

As a freelancer I don’t get to go to office every day, I don’t have a permanent team, leadersand colleagues, however it is very nice to be a member of – how I call it – a family of international sport TV ‘gypsies’.  It is rewarding to meet same people at different events again and again. I have met many colleagues I worked with at Olympic Games in Rio. I entered the office in IBC and I met a friend with whom we used to do skydiving together and organised skydiving competition coverage, another girl we worked in Sochi for the same production company, my former line manager from EURO 2016 is also here, etc. It is nice to feel a part of this global family. We help each other, share information and knowledge, and exchange news during event-free time, recommend each other for different projects and always stay in touch.

AISTS – Do you have any advice for those looking at the next step in their sports administration career and wanting to get into events?

My advice would be to be patient, to be open to learn and share, to respect your team and common vision of the project, to make an extra effort to improve your skills and to continue to give and share with your colleagues, fellow alumni and friends.