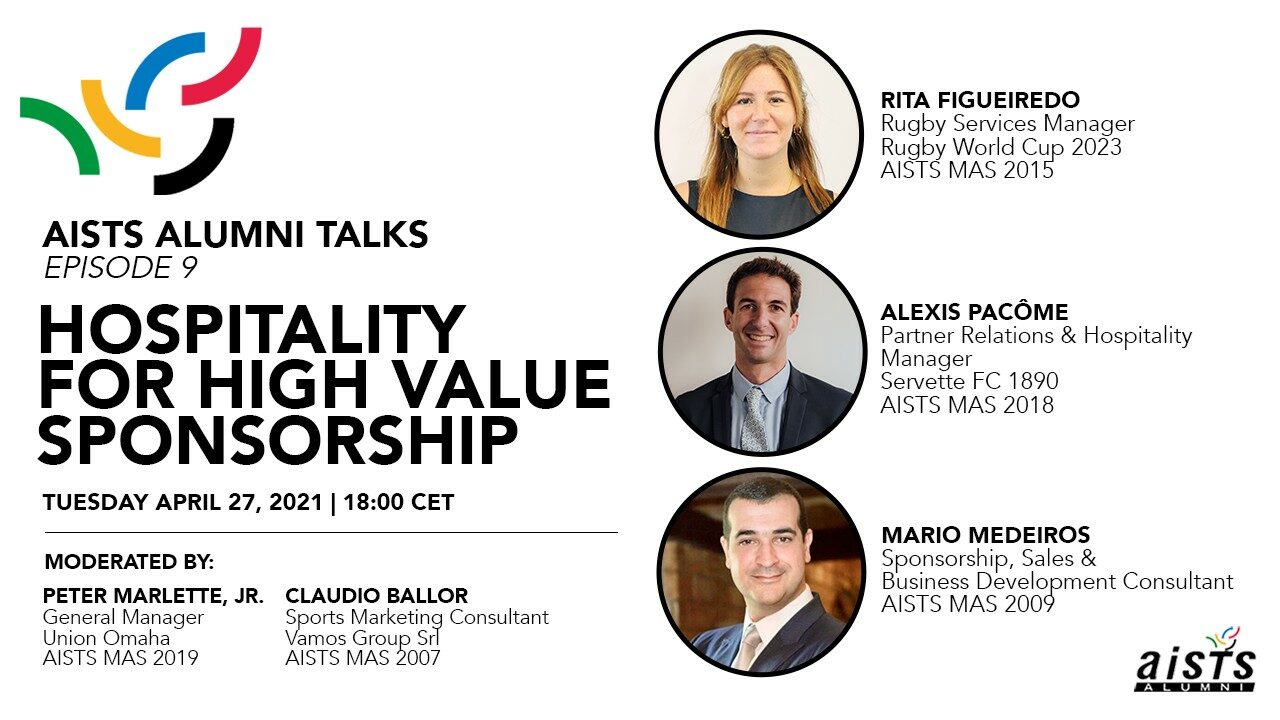 The 9th episode of the monthly series of the AISTS Alumni Talks will take place on Tuesday, April 27 at 18h00 CET. The session will tackle one particular aspect of sponsorship, hospitality, hit hard by the pandemics. Panellists coming from different areas of expertise will discuss what to expect in the near future. These points of views will comprehend major sports events, primary international sports federations and clubs to provide a complete overview on the topic.

With a business and finance background, Rita is an AISTS MAS 2015 from Portugal with 8 years of experience in international events and project management across different countries. Her career path includes a National Rugby Federation, the International Tennis Federation, the organisation of the Heineken Champions Cup and Challenge Cup (European Professional Club Rugby) and experience in venue operational planning. In 2019 she worked in Japan. Firstly for the 2019 Rugby World Cup and then for the Olympic Games Tokyo 2020, focusing her work on the official in-venue hospitality program delivery from an operational point of view. She is currently working at World Rugby, based in Paris, on the Rugby World Cup 2023.

He started his professional career in Private Banking as an Investment Advisor. After 9 years working in 5 different countries, he decided to switch into the world of sports and graduated from AISTS in 2018. Being involved in event organisation for the last 5 years, he specialised in sponsorship management and hospitality.  Working at Servette FC, the Geneva football club, playing in the Swiss top division, he is now in charge of the club’s hospitality programme where he supervises a team of 4 growing to 50 on game day, welcomes 500+ VIPs for every home game and has launched 3 new VIP areas. Always curious about best practices in other sports and clubs, he connected with counterparts in France and Switzerland in order to improve Servette’s operations that led to a 38% revenue increase despite covid-19.

He is a Brazilian national with 15+ years of sports marketing & sports business development, with over USD 420 million generated in commercial partnerships & sponsorship sales. Throughout his professional career, Mario has served in commercial leadership roles at the International Volleyball Federation, Rio 2016 Organizing Committee for the Olympic & Paralympic Games, professional volleyball teams alongside work experience with major sporting events such as FIFA World Cup and World Athletics World Championships. Mario speaks five languages, he is an AISTS MAS 2009 and additionally holds a University degree in Communications and certification in Strategic Negotiations granted by Harvard Business School.